the bach: the time i got serious with reality tv.

so, it's 9:30 am and i am writing this post feeling like i am hung over. i, however, am not hung over, but i did take a sleeping pill last night around 10:00. i have been struggling with insomnia which, pardon my french, SUCKS, considering story is now sleeping well and i am not. do i need to tell any of you mamas how awful it is to not be able to sleep when you actually can be sleeping? no, no i don't.

at least the sleeping pill worked well, right? considering how i am really still asleep right now. could i say sleeping or asleep one more time? the answer is no.

i watched the bach while my eyes bled from being so tired from the night before. and i had to work on a project while watching the show so i didn't have my laptop open jotting down (also known as typing) my reactions to all these dudes' dumb comments.

(am i a little hostile or something?)

all in all i didn't think the show was that funny last night. maybe it was because she went on dates with two guys that i like, jef and sean, whom i actually think are somewhat normal, and are "on this show for the real reason"… as real as it gets when it comes to cheesy reality tv at least.

i thought jef was cool as usual, rocking his connies and bruno mars hair. and sean was a fun time, too. while i was a little embarrassed for him to get up and yell out those love statements, i thought he did well with being put on the spot. 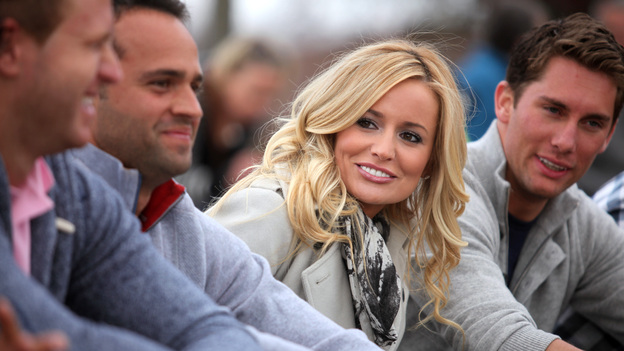 but, most of the show focused on glossy lipped kalon's comment about ricky being "baggage." i completely, wholeheartedly think that was the wrong thing to say. he was out of line and, like emily, i would lay the smack down, too.

but… hold that thought. i'm gonna pretend like the bachelorette is actually real life for a minute here…

i'll go out on a limb here and say that going into a relationship with someone who has a child, or children, from a previous relationship IS a lot different from dating someone without kids. while that child is definitely not "baggage", it is a whole other person you are committing your forever to if you marry their mom. i agree it is ultimately a blessing, like emily says, it will be hard to see it as a blessing sometimes. it's not only taking that child as your own, it's working through how that past relationship (in this case, emily and ricky's dad) is going to affect your future. cause it is going to affect your future, emotionally, physically, and more. i, obviously, have not walked that road myself so i can't speak from experience. but i can say this: being a parent isn't all dance parties, as jef states. and it isn't "finding out what the person you care about likes and liking it, too." (was that arie?) a child is not a hobby. parenting isn't thrown in on the list of i like tos. i like to scrapbook, figure skate, and parent well. no. no, it doesn't work that way.

and it's not just the long sleepless nights, money spent, poop all over the place, and stepping on legos that makes you curse to yourself every morning. it's growing, it's changing, it's stretching ourselves, it's learning a new kind of love, it's teaching, it's realizing, it's having our hearts broken and, prayerfully, mended all over again. and, if you are struggling with the fact that the child isn't biologically yours, like kalon admitted to, it will be only that much harder. so, for him admitting the struggle he was having with accepting ricky as his own, i commend him for putting his ugly thoughts out there. cause we all have those ugly thoughts. but not all of us will say them.

did i just get that serious about this week's bach recap?